Ligands in homogeneous catalysis are now ubiquitous and relevant for both research and commercial applications globally. Access to a variety of building blocks for ligands in catalysis is crucial to the successful development of new ligand systems. CYTOP® 282T (Strem Catalogue # 15-7535) is a mixture of two bulky secondary alkylphosphines that can be used as a building block for more complex catalysis ligands and provides an alternative to adamantyl and tertiary butyl alkyl functional groups. These “phobane” type ligands are not only effective in a variety of chemistry, but are much more cost effective than the aforementioned functional groups, and are available at commercial scale. These building blocks can be used as a mixture of isomers or separated chemically by selective protonation to provide two pre-ligands with different donor strengths (1).

It is known in the literature, that secondary phosphines made from either isomer will have different coordination chemistry and thus catalytic performance as well. Functionalized derivatives have been proven effective in both hydroformylation (3), dehydration of alcohols (4) and metathesis (5). The bulky nature of the ligand, as well as being a strong donor ligand, makes it amenable to all of these chemistries. 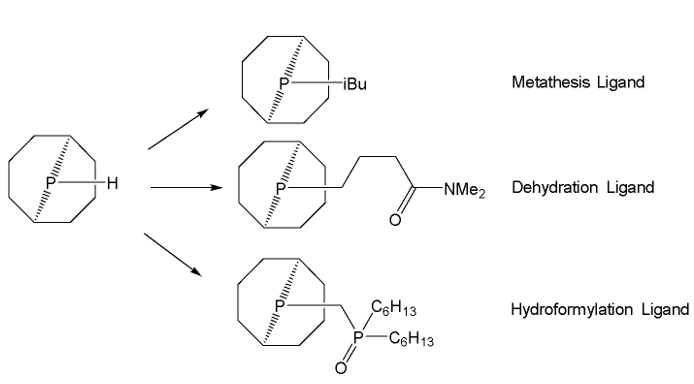 Furthermore, these ligands can be employed to form both homo and hetero-diphosphines to provide a range of bulky bidentate phosphine ligands (6).

CYTOP® 282T (Strem Catalog # 15-7535) is supplied as a solution in toluene as the parent dialkylphosphines are pyrophoric and solids, and this form allows for a simpler and safe use of the material. For other primary, secondary, and tertiary phosphine ligands, please review the following products here.

All products sold in collaboration with Solvay