Thin films of cerium dioxide (CeO2) have a variety of applications including optical waveguides, anodes in solid oxide fuel cells, gas sensors, buffer layers for the superconductor YBCO (YBa2Cu3O7-x), and as a high-κ dielectric layer for complementary metal-oxide-semiconductor (CMOS) logic and memory devices. Moreover, the addition of CeO2 to hafnium oxide stabilizes the high-κ cubic and tetragonal phases improving the functional properties of the common monoclinic phase [1-3]. In this regard, the tertiary oxide CeAlO3 is another attractive candidate due to its high bulk permittivity (κ) of ~3000 [4]. Additionally, CeO2 is employed as a catalyst for reactions like NO reduction and CO oxidation [5]. In combination with Pt (e.g. 1% Pt/CeO2) the catalytic activity of Pt particles can be improved [6].

In pursuit of a highly volatile and reactive precursor for the growth of Cerium dioxide (CeO2) thin films using chemical vapor deposition (CVD) and atomic layer deposition (ALD) methods, the monomeric CeIV complex Tetrakis[1-(methoxy)-2-methyl-2-propanolato] cerium, [Ce(mmp)4] was synthesized and evaluated in 2009 as an alternative to the thermally more stable β-diketonate compounds such as [Ce(thd)4]. It was found to be more volatile evaporating with essentially no residue as revealed by thermogravimetric analysis. Additionally, [Ce(mmp)4] provides a high reactivity towards water, enabling atomic layer deposition at temperatures as low as 150 °C and avoiding the need for a stronger oxidizer like ozone [1].

The high solubility of [Ce(mmp)4] enables trouble-free liquid injection delivery for both CVD and ALD processes using cyclohexane and toluene as possible solvents [1-6]. For CVD, oxygen is used as a co-reagent yielding CeO2 thin films at temperatures of 250-600 °C with low carbon content and an enhanced growth rate with respect to [Ce(thd)4] [1-6]. The ALD processes use water to serve as oxidant and has a broad ALD window from 150-350 °C [2, 3].  Attributed to the high thermal stability of [Ce(mmp)4]   (~275 °C under CVD conditions) in contrast to other homoleptic mmp compounds such as [La(mmp)3] and [Gd(mmp)3] [1]. 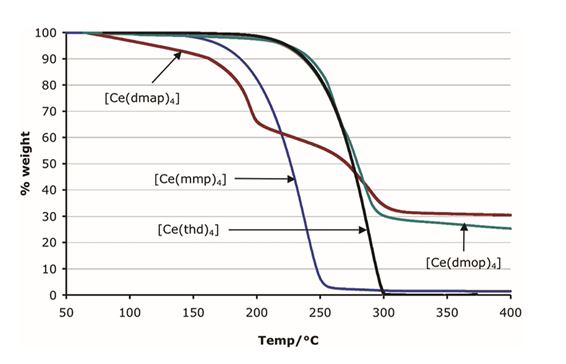 Fig. 1. Thermogravimetric analysis of a series of Ce complexes. 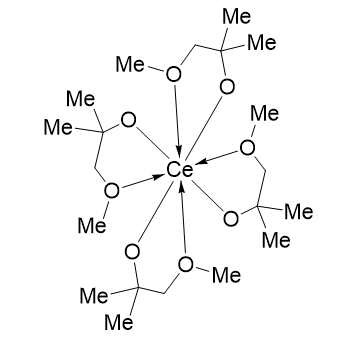