Tricoordinate phosphorus compounds are frequently employed as ancillary ligands in transition-metal catalysis. Their ability to function effectively as ligands is owed, in part, to the nucleophilic lone pair of electrons on the P atom located in an accessible HOMO. However, the LUMO of these compounds is much higher in energy, preventing access to electrophilic reactivity at phosphorus. Recently, the Radosevich group at MIT discovered that imposing geometrical distortions on tricoordinate P(III) can significantly lower the LUMO energy of these compounds (Figure 1), thereby enabling biphilic reactivity and facilitating their use as transition metal-free catalysts.1

Figure 1. Illustration of the effect of geometry and symmetry constraints on the HOMO-LUMO gap of trivalent phosphorus compounds

One such constrained P(III) compound which has been successfully applied in catalysis is the phosphetane compound 1,2,2,3,4,4 hexamethylphosphetane (Figure 2a). The primary application that the Radosevich group has developed for this catalyst involves sequential transfer of oxygen atoms from nitrate groups, leading to net reduction and the formation of new C-N and N-N bonds through cyclization (Figure 2c,d).2,3 In these reactions the catalyst cycles between P(III) and P(V) oxidation states, with phenylsilane enabling catalyst turnover as a terminal reductant. Although the more reduced P(III) phosphetane catalyst is air-sensitive, the on-cycle phosphetane oxide precatalyst (Figure 2b) can be handled under air and displays identical catalytic ability to its reduced counterpart. 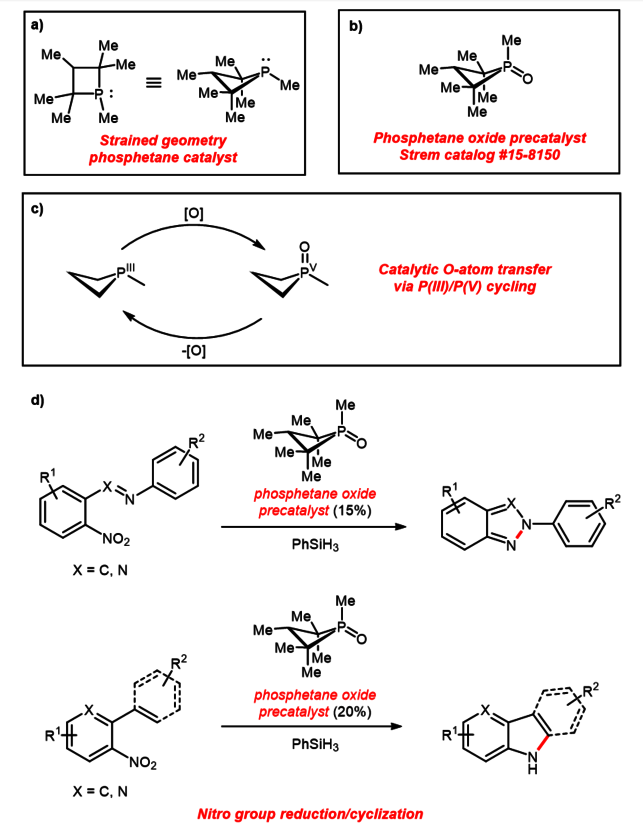 The phosphetane catalyst has also been applied to the intermolecular cross coupling of nitroarenes and boronic acids (Figure 3).4 The scope of this method is complementary to previously developed C-N bond formation reactions such as Buchwald-Hartwig amination, providing excellent yields for the coupling of electron-rich boronic acids with electron-poor nitroarenes.

Redox cycling of phosphetane and other strained P(III) compounds shows promise as a developing field of catalysis, with the potential to provide unique answers to synthetic problems and complement the known reactivity of traditional transition metal-based systems. The Radosevich phosphetane oxide precatalyst is available from Strem Chemicals.