An efficient and environmentally friendly catalyst for organic transformations

ZnTAC24® is a tetranuclear zinc cluster that is a highly efficient catalyst for a wide range of organic transformations.1 This catalyst, sold in collaboration with Takasago is available in our product catalog (30-4050).

This catalyst was first introduced by the Mashima group at Osaka University. After the first introduction, ZnTAC24® has been used by researchers worldwide as an acidic catalyst. For instance, the promising influence of this catalyst has been reported: a) in the direct formation of oxazolines from esters, carboxylic acids, lactones,2 and nitriles, b) in the transesterification7 of various methyl esters3 including α-amino esters and β-keto esters, c) in the acetylation of alcohols4 in EtOAc, and d) in the deacylation of esters in MeOH.6 One of the unique properties of ZnTAC24® is the acylation of hydroxyl (OH) groups selectively in the presence of inherently much more nucleophilic amino groups.4 Cycloisomerization catalyzed reactions have also been reported.5 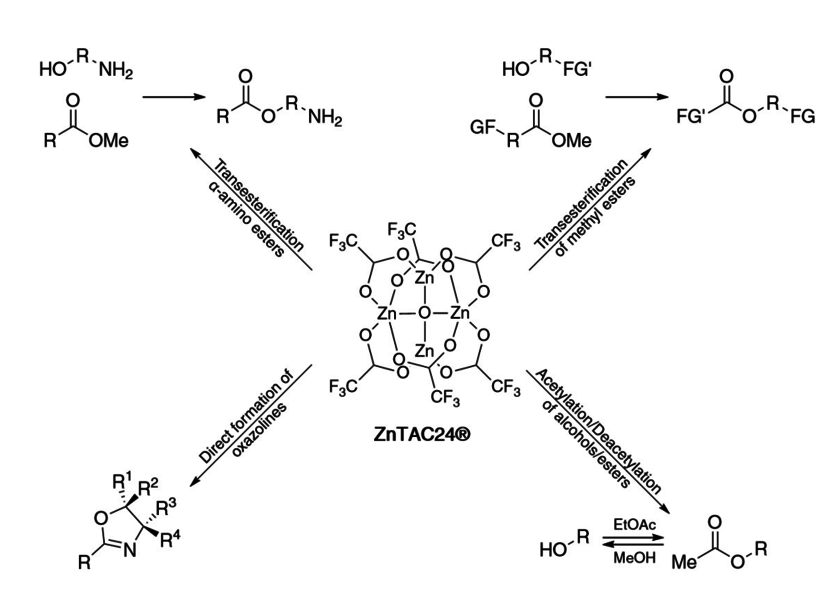