Yttrium Oxide (Y2O3) has shown to have some interesting applications in microelectronics as a gate dielectric material due to its high permittivity, compatibility with silicon, good thermal stability and relatively large conduction and valence band offsets 2.3 eV and 2.2eV respectively. 1 With these properties, Y2O3 can be considered as a replacement for SiO2 in transistor and memory applications.  Other potential uses for Y2O3 include being a waveguide material due to its high refractive index (1.8)2 or  a buffer layer for ferroelectrics and superconductors because of its low lattice-mismatch with silicon.  It has also been considered for optical and protective coating layers.

There are many methods to deposit Y2O3 thin films, but atomic layer deposition (ALD) stands out as having many advantages over the others. These include superior step coverage, excellent film uniformity, exact thickness control at nanoscale, good surface morphologies and low film impurities.  Yttrium amidinate compounds have been successfully used as ALD precursors to grow high quality yttrium oxide films.3 These amidinate precursors are volatile, thermally stable and have good reactivity with water.3 The deposited films show high growth rate, smooth surface, and excellent electrical properties.3

Strem Chemicals offers the Yttrium amidinate precursor #39-1550 Tris(N,N’-di-i-propylformamidinato)yttrium (III), 97% for the ALD growth of yttrium oxide thin films.  This precursor is thermally stable with high vapor pressure (~ 100mTorr at 75oC) and has good reactivity with water serving as the oxygen source in ALD. 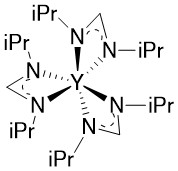